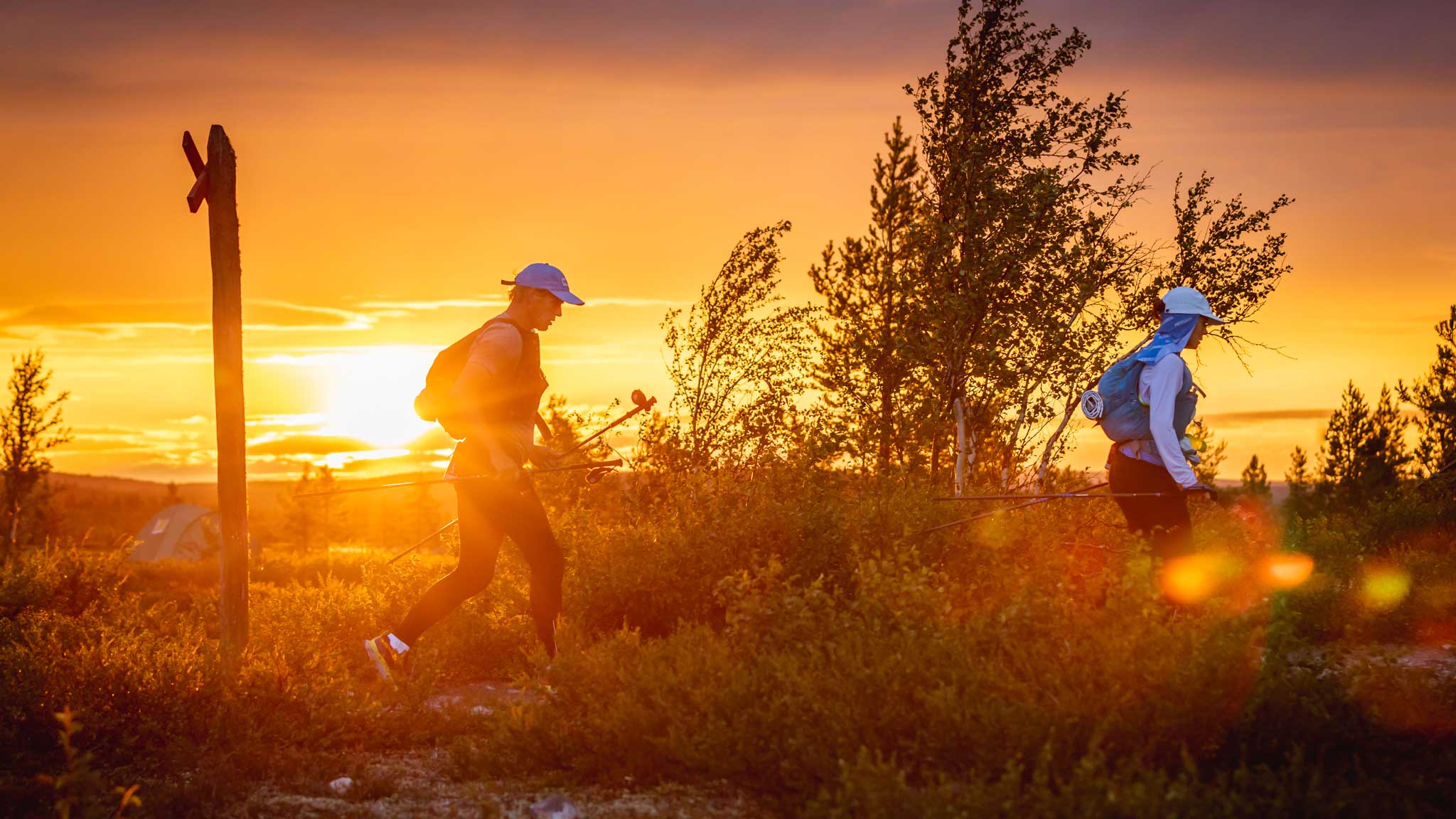 The unforgettable journey starts from Njurkulahti trailhead in Lemmenjoki National Park. It first follows a hiking trail to Morgamoja historical gold mining area. From Morgamoja it crosses old gold mining sites and leads to the deepest forests of the largest national park in Finland. Track crosses Postijoki and Vaskolompolo wilderness huts and ends in Kalmankaltio, where the first aid station is located.

From there, the track heads to Pöyrisjärvi wilderness area. The route follows an ATV and mountain biking trail through the tundra to the remote lake Pöyrisjärvi. Crossing of Pöyrisjärvi river is an unforgettable experience.

After Pallas, the track continues along the Ylläs-Pallas hiking trail, Rauhala village and after incredible 326 km finishes in Äkäslompolo, near Ylläs ski resort. The finishers are greeted with a hot meal, showers, sauna and a finisher prize.

The event centre is located in the village Äkäslompolo, which is close to the fell Yllästunturi a.k.a. “Ylläs”.

You will get a map, a bib number with a timing chip and safety pins at the bib pickup. GPS tracking devices are given to all runners. These devices are first tested after bib pickup, then switched off until just before start to ensure the batteries will last (race organiser will instruct at starting point).

During bib pickup, the drop bags of participants are collected. Each participant can leave three drop bags in total, one for each of the following aid stations:

Maximum size of each drop bag is 100 liters. A drop bag can be for example a duffle bag. Each drop bag must have following information CLEARLY written outside the bag:

Recommended items in drop bags include:

Please note that drop bags are NOT transported between aid stations. Because of this, gear in each drop bag must be sufficient by itself.

If the participant chooses to carry trekking poles, they must be carried from start to finish. Trekking poles are  allowed to be stowed into drop bags. Please pack the poles with care. The organizers will not take any responsibility of broken poles.

NUTS 300 race track is followed using a GPS device brought by the participant. The track is unmarked. You have to be able to follow a GPS track at all times, and provide enough power for the GPS device. Please note, that the GPX-file of the race track is quite large (13 MB), and might be too large for some devices (notably sports watches).

The route passes through reindeer herding area. The summer reindeer round-ups are done at the turn of June-July, and the timing is dictated by nature. If reindeer round-up is held during NUTS Distance 300, we will avoid disturbing the round-up areas by using an alternate route. This is denoted in the route description as:

Plan A = No reindeer round-up

Plan B = Reindeer-roundup during the race

The final route will be announced a few days before the race, when we know the situation of the local herders. Be prepared to switch to the correct GPS track in your device in the event of route change.

Map is provided by NUTS 300 on the race webpage. It is recommended for participants to print the map in their desired format.

More detailed maps are available in Finnish outdoor stores, but are not mandatory equipment. You can also use Retkikartta.fi service to study the route and print your own maps. We strongly recommend downloading offline maps of the area on your smartphone in case of main GPS failure. You will be passing through seriously remote locations, so be prepared to find your way back to civilization. Test the offline maps by enabling flight mode in your smart phone in advance.

Njurkulahti – Morgamojan kultala, 26 km: Participants are transported from Äkäslompolo to Njurkulahti by bus. The start of the first stage follows the hiking trail in Lemmenjoki National Park. Lemmenjoki is the largest national park in Finland and known for its rich history in gold mining. The trail is quite fast at this point. Lemmenjoki river can be crossed with a cable boat either at Searitniva or Härkäkoski.

Morgamojan kultala – Kalmankaltio, 62 km: Most challenging section of the whole race. The route crosses a truly wild part of Lemmenjoki National Park. This is as remote as you can get in Finland. The track is technical and there are a few swamp crossings. Distances to nearest roads are very long. DO NOT QUIT AT THIS POINT OF THE RACE, BUT PUSH TO KALMANKALTIO UNLESS THERE IS AN IMMINENT HEALTH RISK IN DOING SO! During the section, you will see the wildest parts of Finland, gold mining areas, the most remote library of Finland as well as Postijoki and Vaskojoki wilderness huts.

Kalmankaltio–Kalkujärvi–Pöyrisjärvi, 74 km: The track continues along an ATV trail towards Pöyrisjärvi wilderness lake. The terrain is sandy and barren tundra. The track passes through Kalkujärvi village, inhabited by indigenous Sami people and one of the most remote villages in Finland. Participants will ford the river Pöyrisjoki memorably by going into the lake Pöyrisjärvi, where the water is shallower. The track continues right along the shoreline for a few kilometers.

Pöyrisjärvi–Näkkälä–Hetta, 44 km: The track will pass the village Näkkälä, after which it will follow an old post route to Hetta. The section is beautiful with very old pines right at the Northern timberline. The route will pass a famous ghost hut Näkkälän Välitupa.

The track follows Hetta-Pallas hiking trail, which is one of the most popular hiking trails in Finland. The track climbs up and down the Pallas fells. The views along the route are considered as the most precious national scenic areas of Finland. The area is known for reindeer husbandry, and if you have not yet seen any reindeers, you will now.

There will be an extra detour to Ketomella in the Hetta-Pallas route leg.

The track follows Pallas-Ylläs hiking trail. It crosses Äkäskero and Kukastunturi fells. The last stage is crowned with views towards Ylläs fell and thoughts of hot shower and a warm meal.

Changes compared to the plan A routes are:

We recommend to use energy gels with closable caps or to repack your energy gels beforehand in small resealable bottles. Please dispose of your garbage at the aid stations or the garbage bins at the Race Centre.

Water, bananas, sports drinks, salty and sweet snacks are available at all aid stations. Aid stations will also take care of vegans, gluten-frees and those allergic to chocolate – at least. Please pay attention while signing up that you inform us about your special diets.

In case you need any extra gear or clothing at the starting line, the race organiser will transfer them back to the finish lines in Äkäslompolo. Kindly mark your belongings properly with your name and a bib number; loose jackets and/or pants might get dirty so pack all items that are to be transferred to e.g. in plastic bags. Plastic bags and stickers are provided at bib pickup. Please note that the bags might be stored outdoors.

NUTS Distance 300 exit points are locations where a participant can quit the race. Due to the remote nature of the event, it is challenging to evacuate participants from the wilderness. Because of this, the organizers aim to channel all participants who wish to quit to the nearest exit point (usually the nearest road). ATV evacuations are done only in a medical emergency (e.g. fractured knee). The ATVs are not ”taxis” that take participants suffering from hydration problems or fatigue to the nearest road. ATV evacuation in Lemmenjoki and Pöyrisjärvi wilderness areas is always a challenging and difficult endeavour.

Please ensure you always know the closest exit points. If you are not confident that you can make it to the next exit point, consider discontinuing the race. In case of extreme fatigue, rest for 8 hours and continue to the nearest exit point. Our safety crew will patrol even the remote areas by foot or MTB. They can provide assistance, such as tent and food. Contact the Race Center number (+358 40 6605 281) if you plan on stopping for an extended period or wish to receive help.

If you are on an exit point and wish to discontinue the race, call the Race Center number to arrange pickup. Please be mindful that due to the long distances the pickup might take several hours.

The most common problems are blisters, abrasions, injuries caused after falling and fatigue after running out of energy and dehydration. There is always a risk of hypothermia after your speed gets slow or you must stop. Prepare yourself so that you can help yourself and get to an aid station or to the nearest shelter. It is absolutely mandatory to help others in need. If any of the fellow runners seem to have troubles please ask his/her condition.

You must carry a mobile phone in case for any help (for you or for fellow runners). Race organizer can also call you to ask for help for other runners or to check your status. Even though everything is OK with you when emergency duty number calls – please answer!

Best cellular connections in remote areas of Lapland are provided by the “Telia” telecom operator. If your phone service is provided by someone else please consider of getting a Telia prepaid SIM. If you change your phone number for the race please remember to change it also to your personal details provided to organisers. Despite this, the reception on sections Njurkulahti-Kalmankaltio and Kalmankaltio-Hetta is very limited.

In case you prefer to use your national SIM card, please ensure before the race it works properly (roaming in Finland)

If you decide to quit, please do so only at the exit points. If you are not able to move, evacuation will be carried out by National Emergency Services. In many areas a helicopter is needed, so be safe.

During the race, safety teams will patrol the race track. They will ensure that all participants will make it to the next aid station. Safety teams will have satellite messengers. In addition, a rescue team will be on duty 24/7.

In case of serious accidents call public emergency number 112 first and ask for help. After that, contact the race’s emergency duty phone +358 40 6605 281

Participants must take care of their own insurance policy.

Showers: Showers & Saunas are available for participants after the race at Lapland Hotel Äkäshotelli.

After Race meal: There will be soup and salty snacks available at the finish. Salty snacks are naturally gluten free and for the vegans there is also vegan friendly soup available.

Runner can be disqualified if

Runner will be disqualified if